Today is the last day of the “100-Day Burpee Challenge.” The challenge involved doing one burpee on day one, two burpees on day two and so forth. It has been a long and tiring 100 days. Doing burpees was incidental to the challenge, rather developing the habit, the stick-to-it-iveness, the consistency and keeping your word were the real challenges. Thankfully, there were several of us that kept each other in check with blog posts, facebook messages, emails and text messages. Those of us that stayed in contact completed the challenge, those people that stopped posting and emailing fell off.

The best experience of this challenge came from the side bet that arose out of a little internet banter. My friend, Juan, posted that he had completed 93 burpees in 8:15. I thought that was particularly fast and decided I would try to beat it. I did 100 burpees in 8:10. I posted my score and thumbed my nose at Juan. A little brouhaha ensued and our friend, Samantha, decided we should go head to head in a 100 burpee showdown. The loser would be crowned “DFL 2009.” 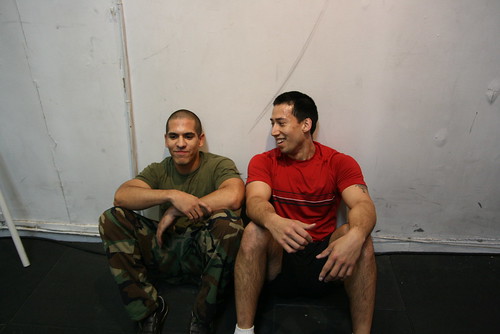 Here’s a little history, back in the day, Juan had earned the moniker “DFL” from me because I noticed that he had this habit of finishing the WODs Dead Fucking Last. Juan is a strong dude and a Marine so I figured he could take a little abuse. In fact I think he needed a little abuse just because I think he lacked motivation. Juan is his own man and he let the comments roll off his back. Recently Juan decided he’d finally had enough and he started busting his ass. In the last few months, Juan has gotten his diet in check and started busting ass on the WODs and posting some impressive results. Most recently he banged out 24 rounds of Cindy. This is in sharp contrast to the 11 rounds he posted several months ago that caused me to abuse him mercilessly. Anyway, now that he was on track it was time to put him to the test.

The week before the showdown we were doing our daily burpees and posting our times and talking trash. There was a pool set up and people were putting in $5 and guessing how many seconds Juan would beat me by. Apparently picking me to win wasn’t even an option! I think the reasons were two-fold: 1) Juan has shown consistent improvement over the last couple of months and 2) people know that betting against me pisses me off. 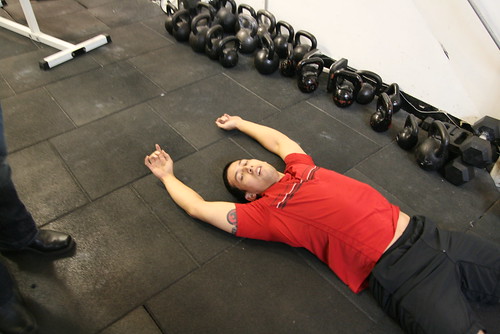 In my opinion the job of a coach and a teacher is to bring out the best in your students/athletes. The hope is that one day they will surpass you and their abilities and achievements will outshine yours. There are as many ways to elicit this response from your athletes as there are athletes. Granted some of your athletes will never be that good and some will be better than you before they stumble upon your gym. The point is that, like in all interpersonal relationships, you take people how you find them and you try to leave them a little (or a lot) better off than when they met you.

For all my ball-busting and name calling, I still want the best for Juan (and all my athletes). I want him to succeed. How I get the best out of him might require me to get dirty. Sometimes I have to be like Morpheus and tell my clients to “hit me!” So what if Juan didn’t win this time, he tried his very best and got a PR. Also he is fired up to prove himself now and that will inform his training and make him stronger in the long run. My hat’s off to you, Juan. Great job!

How do you bring out the best in your athletes and students? Please let me know in the comments.